There’s still so much to explore up here!

BC Parks recently announced the discovery of a previously uncharted cave in Wells Gray Park.

At 5,000 square kilometers, it’s not surprising that this vast wilderness still hides a lot of secrets. But the newly-identified cave is truly remarkable –it is believed to be the largest abyss ever found in Canada, and among the largest in the world. 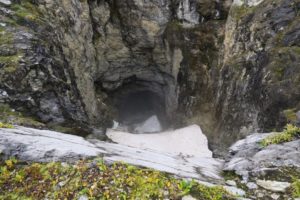 Last spring, as the Ministry of Environment and Climate Change conducted a routine aerial survey of the BC caribou population, the crew noticed a previously unmapped geologic formation. Upon further exploration, they determined that it was the mouth of a very large cave. BC Parks, the provincial government, and the Royal Canadian Geological Society then organized a team of geologists, surveyors, and expert cavers to study the new discovery, which is tucked away in a very remote corner of the park. After months of satellite-aided investigation, the team undertook an expedition to the hard-to-reach area in September.

The team has nicknamed the cave “Sarlacc’s Pit”, because of its resemblance to the fictional location from the pop-culture Star Wars franchise. The government and First Nations are working together to finalize an official name.

How did it manage to hide all this time? 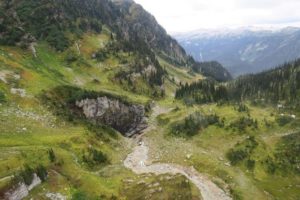 Well Gray is an important conservation area for Canadian flora and fauna. It’s believed that the cave, which is part of a watershed that feeds Ovis Creek, was buried under year-round snowpack until this century –rising global temperatures have contributed to the revelation of the glacially-formed cavity. The mouth of the cave, alone, is estimated to be roughly the size of a football field (100 meters x 60 meters). The underground caverns could extend several kilometers.

BC Parks has closed the area around the cave, which lies deep in the backcountry. Access to the site is gruelling, even for the most experienced backpacker. The exploration crew, consisting of scientists and world-class spelunkers, were flown into and out of the site. The team concluded that the vertical drop, rushing, freezing water and extreme location of the cave make it extraordinarily dangerous.

Additionally, the site is environmentally sensitive and potentially culturally significant to the region’s First Nations. Any further exploration will be undertaken by highly-trained crews for approved scientific purposes, only.

Any member of the public attempting to reach the area is subject to a $1 million fine.

So…What does that mean for Alpine’s visitors?

The North Thompson, Clearwater, and Wells Gray areas are still just as magnificent as they have always been. Our guests are exploring and discovering new, awe-inspiring adventures every day. You may not be able to venture to Sarlacc’s Pit, but it is exciting to have it so nearby. We are proud to be connected to such an important geologic discovery!

It proves what we already know: our home is one of the most spectacular places on the planet.

Plan your visit to Alpine Meadows! We welcome you to our amazing, undiscovered country.